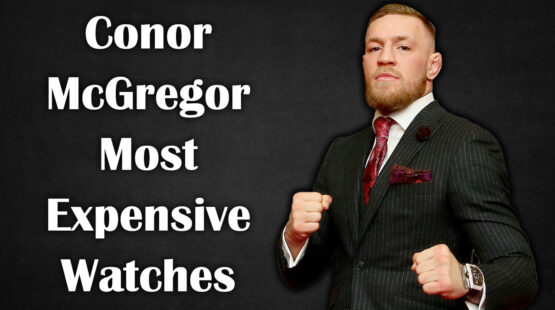 Always dressed to impress, it’s difficult to envisage the tattooed world-champion fighter beneath the suit at times. Conor McGregor is one of the world’s richest sportsmen and he surely adorns himself in a fitting manner.

When he is not in his fighting trunks with blood on his face and his fists, he’s decked out in true multi-millionaire style. He’s always in a suit and never without some flashy iconic Conor McGregor watch on his wrist.

Conor’s celebrity status comes with the lifestyle to support it. He drives the best cars, owns a lovely mansion, and even bought himself a limited-edition Lamborghini yacht last year. 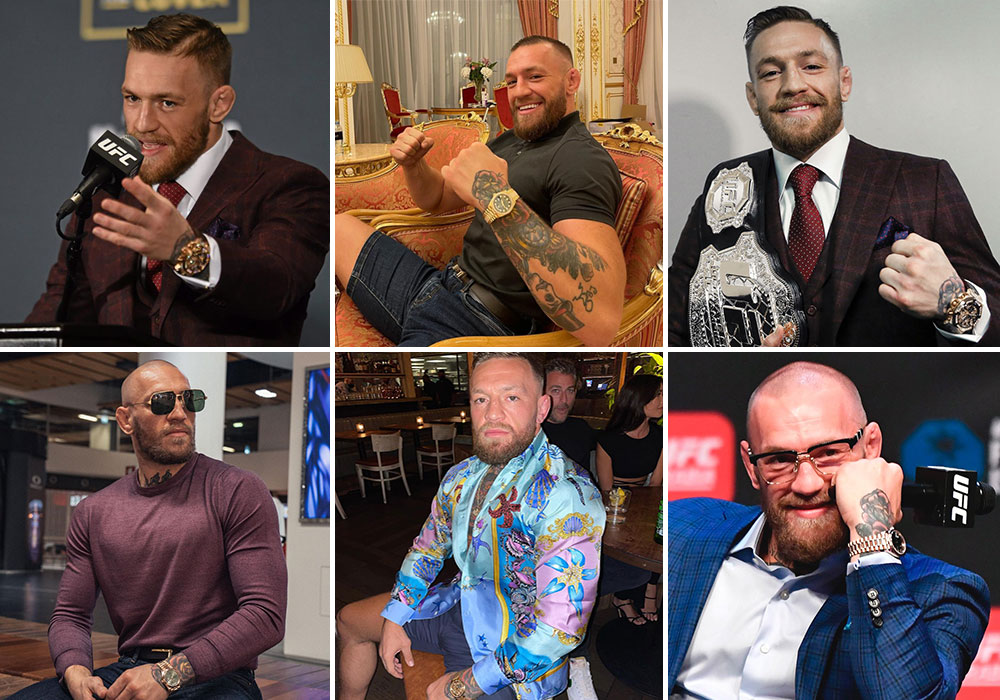 Conor and some of his watches. Collage by PokCas

McGregor’s watch collection is probably the most iconic part of his public image, though. He has a watch for every occasion, as he’s always brandishing new bling on his wrist. While it’s impossible to list all his pieces, we’ve decided to try and identify the 10 most expensive ones in the Conor McGregor watch collection for this article.

The notorious UFC champion has a massive watch collection. Some of the most expensive Conor McGregor watch pieces retail for between a ‘lowly’ $32,000 and a staggering $2 million price tag. Of course, he has items of lesser value, but they are not for this showcase. But why not splurge on luxury items when you have a net worth exceeding $200 million?

A great sporty watch for everyday attire, this Audemars Piguet sports an image of rugged refinement. A great gesture that compliments the fighter’s dual gentlemanly look and tough persona. While the Conor McGregor watch has a silver and black dual-tone, the watch can come in different colors to suit its wearer.

The Royal Oak Offshore has a large 42mm diameter with a push piece-guard that bolsters its sturdiness. The titanium alloy makes the package both light and almost indestructible. Another two qualities that can be compared with its wearer.

Audemars Piguet is only for the wealthy, with a price tag of just over $30K, we don’t see too many mainstream folks wearing this timepiece. Ranking it at number 10 on the list means that there are still heftier price tickets on the way.

No list of expensive men’s watches is complete without a Rolex or two. Actually, this particular Conor McGregor watch is one of many expensive Rolexes in his collection. This olive green-faced watch was specifically bought as a nod to his Irish heritage.

The classic all-gold finish is a great counterpart for a dress suit or tuxedo. The Day-Date model reveals the day of the week at 12 o’clock and the date at 3 o’clock. But the ’40’ series is a little different from the standard Day-Date models. It offers a larger case size while maintaining the classic proportions of the traditional Day-Date.

Yes, so this watch looks a little plain, but when Patek Philippe is involved in the manufacturing process, it is anything but ordinary. Anyway, it is made for the everyday wearer, albeit that the wearer needs to be relatively well off.

This particular watch is a combo of rose gold and steel. The innards include a mechanical self-winding movement with a date display. This two-toned beauty is an all-purpose piece with a 120m water resistance. It boasts a regular clock face and a chronograph display.

We won’t rehash the specs of Patek Philippe Nautilus watches for you all over again. However, you must be wondering why this watch is 20 grand more expensive than watch number 8. Well, unlike the previous two-toned version, this one is made of pure rose gold.

The case, band, and clasp are all made of this elite and special metal. But is it really worth $20K more? Well, Conor McGregor seems to think so. This Conor McGregor watch is another perfect example of any everyday rich man’s wrist strap. It’s beautiful, but it’s plain. 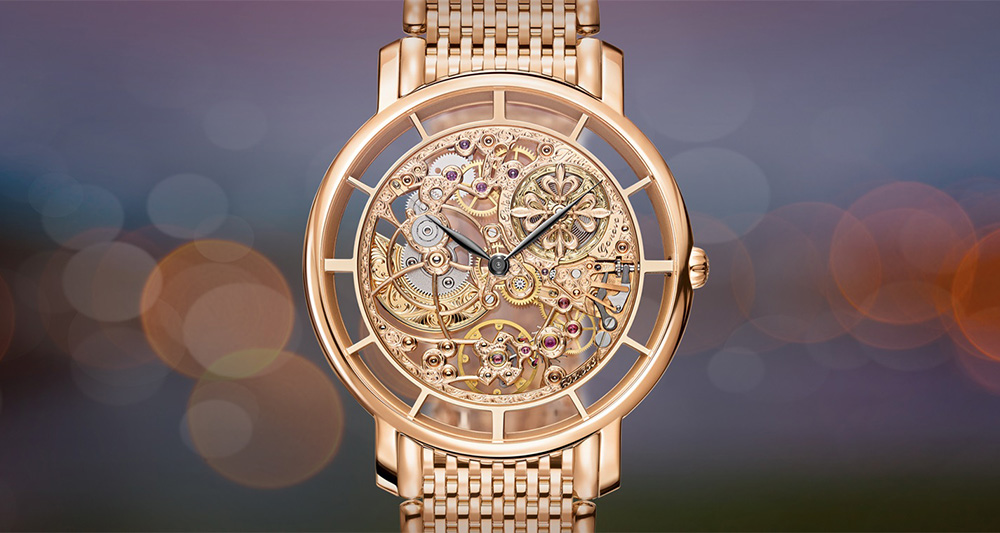 This Conor McGregor Watch is a unique piece with an ultra-thin rose gold frame and a skeleton mechanical movement component entirely engraved by hand. The watch is a self-winding calibre 240 movement piece crafted in celebration of the company’s 40th anniversary in 2017. The hand-made watch took 130 hours to complete.

This decorative piece is highly sought after and extremely rare. Its combination of sapphire and rose gold together with its hand engraving surely makes it one of Conor’s most unique timepieces. It’s an item that not many celebs will be able to match.

Conor McGregor has no fear in doling out the cash on extravagant timepieces. While Franck Muller already has an impressive collection of readymade watches in their portfolio, Mr McGregor has been spotted with one that seems to be customized to his liking.

Because of the bespoke nature of his select piece, it’s hard to nail down a price on this Conor McGregor watch, though it is definitely valued at over $100K. 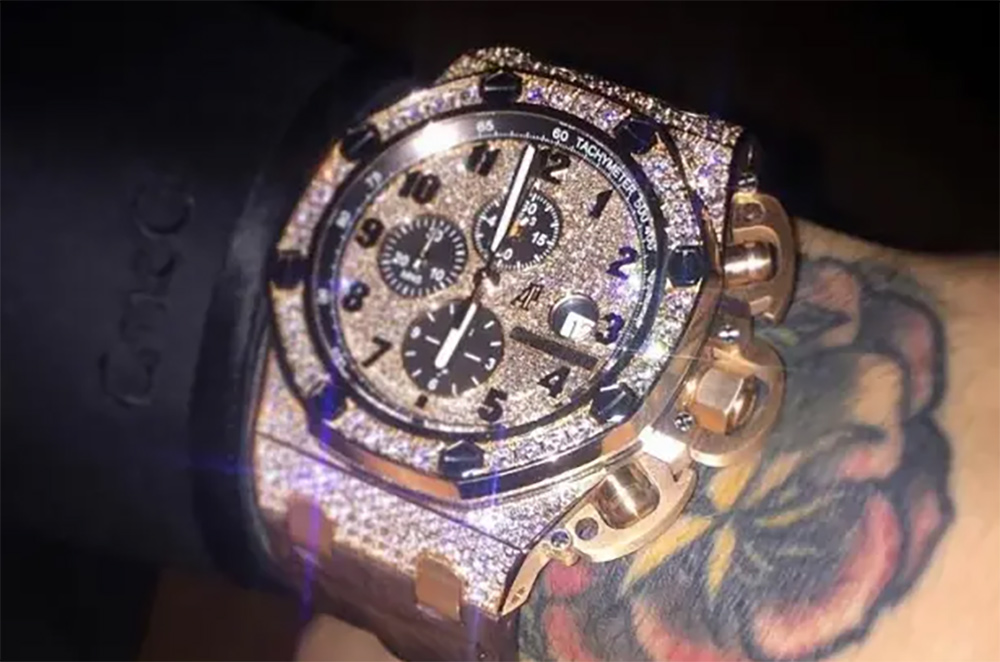 Number 4 is a large leap from number 10, but the second Audemars Piguet Conor McGregor watch is worth a healthy chunk more than the $30K price tag mentioned before. That’s because this watch is made of solid gold and is encrusted with dozens of real diamonds. You won’t find this piece in the watchmaker’s catalog, as it was custom-made for Conor McGregor’s watch collection.

If ever Audemars Piguet wanted to produce a statement piece, this is the one. The shiny “blingage” is almost blinding under the right light. It’s certainly a piece for special occasions. 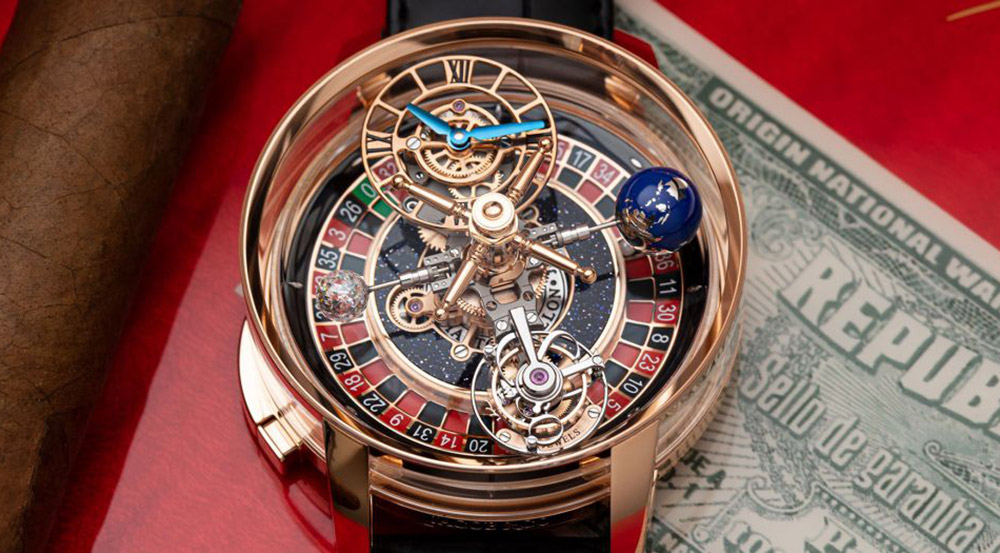 Jacobs & Co only make limited edition statement timepieces. One of the most futuristic-looking ensembles in the Conor McGregor watch case is this roulette watch. It comprises a working roulette wheel (the wheel spins at the click of a button) and four moving arms. One arm boasts the watches tourbillion, another the timekeeping clockface, another a rotating globe of the earth, and the last one is a 1 carat 288 facet diamond. Each arm rotates around the dial once every ten minutes. The crystal casing and rose gold case frame finish the high-end look to perfection.

The only other Jacob & Co Astronomia Tourbillion Casino piece we know out there belongs to the famous singer, Drake. 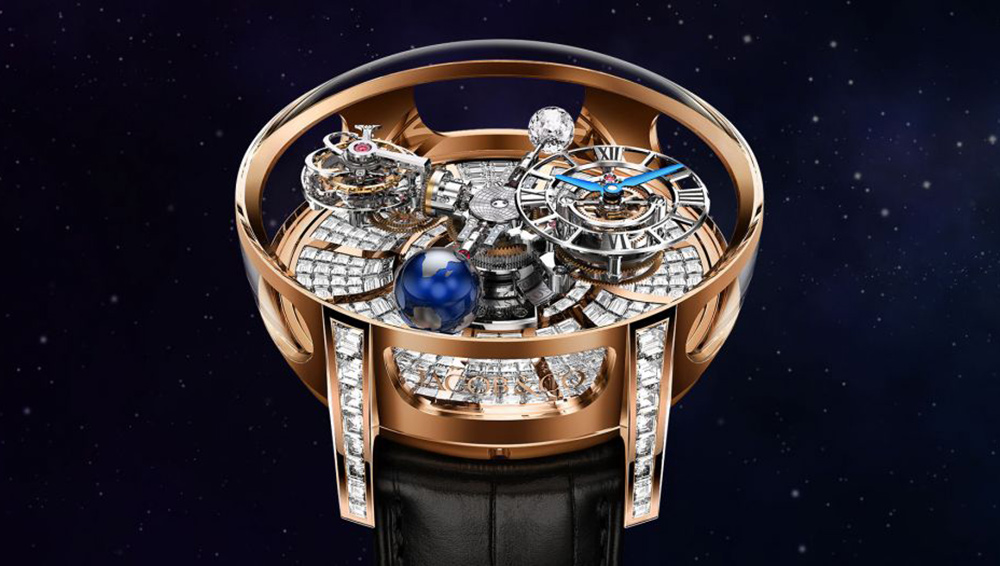 Ever fancied a watch worth more than two expensive sportscars? Well, This Conor McGregor watch price clears 7 figures. The construction follows that of the casino watch when it comes to the four arms and their movement. But the price tag hikes through the roof because this Conor McGregor watch boasts 342 invisible set baguette-cut diamonds on the backdrop of the face.

The components include a rose gold casing, white gold clock face, crystal lens cover, diamonds, a larger 1 carat 288 facet diamond, and a magnesium globe (which turns on its own axis every minute).

This is a shocking piece for more than one reason. Firstly, it’s shockingly blingy, boasting loads of very expensive jewels. There’s a white gold case and a barrage of diamonds. The case band is invisibly set with 178 baguette diamonds while the bezel boasts 100 of the same. The crown is set with 14 baguette diamonds and 1 cabochon-cut diamond. There are also some rubies and sapphire crystals thrown into the mix.

We’re sure that these superb Conor McGregor watches will not be the last pieces we see on the fighter’s wrists. It seems like they are his kryptonite. For that reason, we expect that we’ll have to cover a similar article again in the not-too-distant future. 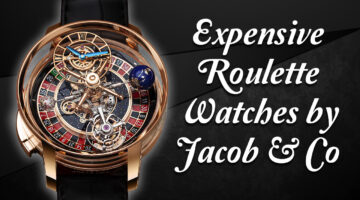 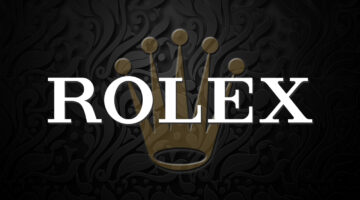 What Makes Rolex Watches so Costly and is the Most Expensive One Worth it? 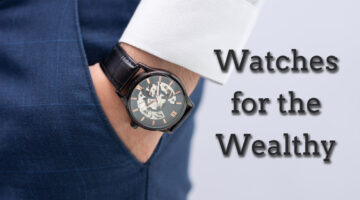 Rolex, Audemars Piguet, Richard Mille, Hublot, and Patek Philippe Are the Most Popular Watch Brands for a Wealthy Gentleman