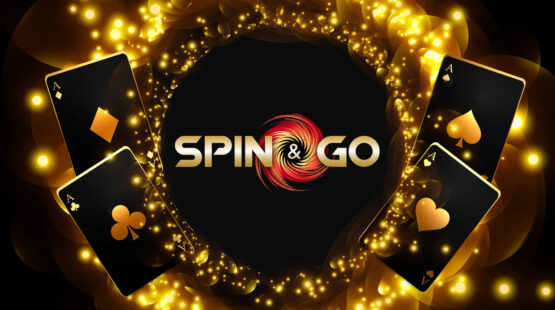 This Spin and Go guide will teach you everything you need to know about Spins also known as Jackpot Sit & Go, Spin & Gold, Expresso, Twister Sit & Go, and HexaPro.

What is Spin and Go?

Spin and Go is a fast three-person poker format where players have a chance of winning huge amounts of money. The classic version has three-minute blinds and a starting stack of 500 chips. Fast Spin & Go poker tournaments have become one of the most popular online poker formats over the past few years.

Thanks to the possibility of winning a big jackpot in a fast 3-player tournament, these games attract many casual players looking for some excitement. Spin and Go’s were first introduced on Winamax (Originally called Expresso), but the idea has spread to other rooms. These SNG Jackpot games (Spins) have impressive stats, it is one of the most popular online poker formats.

Where can you play Spin and Go?

If you’re interested in playing Spin & Go games, you can find them on every major poker site. Make sure to sign up through PokCas to get access to special leaderboards, freerolls, giveaways, and more.

Regardless of where you choose to play, the fundamental strategy remains the same. All of these poker rooms offer low and high buy-in limits, however, they have different traffic (amount of active players during peak hours), Rakeback, bonuses, software, and different percentage of regular (good) and recreational players.

If you are an active Spin and Go player or planning to be one, please get in touch so that we could provide you with additional Rakeback. In some cases, we can do that for old accounts or if you are just planning to sign up, we will help you to find the best deals for your home country.

Best Spin and Go Poker Strategy is to be ‘Smart-Aggressive’. You have to be very aggressive but should not turn into a maniac. Pay attention to your chip stack and blinds. Remember, you can still fold some hands pre-flop, especially in the beginning. When it comes to strategy, it is always best to maintain a healthy bankroll for your level of play and always strive to improve your game by watching training videos, live streams, and examining your hands. Being in a stable or poker school is a great way to grow as a player. If you do these things and keep a cool head on your shoulders, you will be in a great spot to become a winning player.

Aggressive Play for the Win

Spin and Go tournaments feature a shallow structure, where players get to the push-fold stage very quickly. Many casual players fail to adapt to this fact and make far too many speculative calls, trying to see the flop and play from there. The winning strategy in these is to stay very aggressive and push your edge. Avoid limping and calling as much as possible. Don’t be afraid to push your chips fairly wide and put your opponents to the test. This is especially true for Spin and Go’s with high multipliers, where less experienced players are likely to play too tight and reluctant to bust out.

Of course, if you use tracking software (a poker tracker), you can rely on statistics to tell you how to adjust your game. Against someone who folds too much, you can afford to shove almost any two cards. Likewise, if you’re dealing with a player who doesn’t like to fold, adjust your range to exploit this tendency.

Here you can see Spin & Go Small Blind and Button push – all in hand range charts which can be very helpful if you are a new Spin & Go player (Small Blind shoves a wider range of hands). 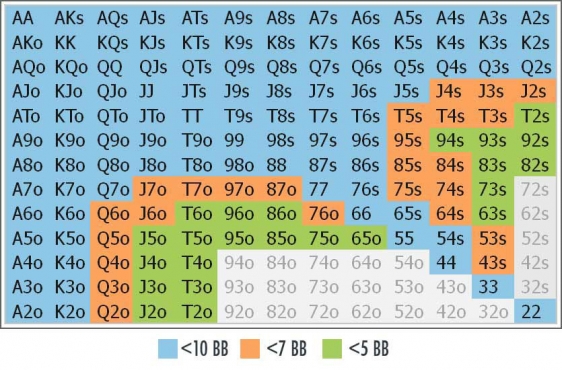 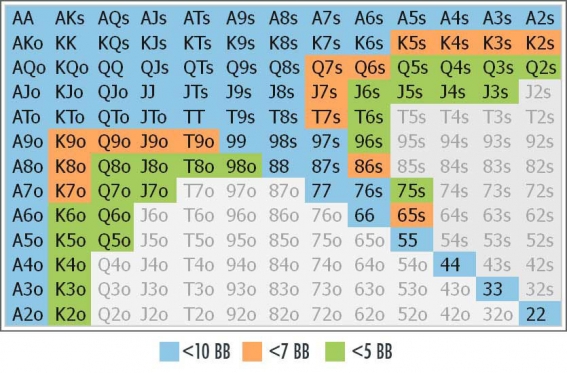 * These statistics do not include promotional spins where the highest prize is way bigger than normal.

** Only available for million-dollar prizes.

*** Unibet’s Hexapro has the biggest multiplayer of x1,000 therefore it is much more likely to hit lower prizes.

Different Spin and Go poker sites charge different rake (fee) for different buy-ins (except Unibet). So, you should make your decision by comparing their rake and rakeback and only then deciding if you should play there or not.

* Unibet’s HexaPro spins have the same %6.853 rake for all limits while GGPoker Network has 8%. 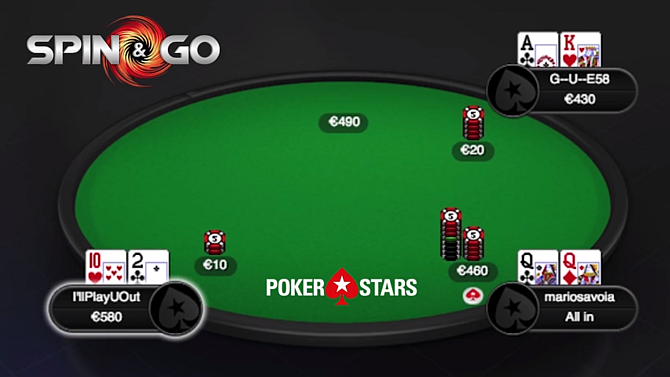 The Best Spin and Go Games Out There

PokerStars was not the first site to introduce Spin and Go games since it did that as soon as they were launched on Winamax. They noticed that this poker concept works very well. PokerStars went all-in with the Spin and Go format and made it very popular. It is great for both players and poker sites since it is generating a lot of rake but is also very rewarding and can be beatable in the long run.

Pokerstars also has Pot-Limit Omaha Spin and Go games for those who love this poker format. It is different and has many bad players who are not used to playing Omaha. So if you prefer it over Texas Hold’em, make sure to give it a shot. PokerStars offers various buy-in limits and it is one of the very few poker sites for Omaha Spin and Go Games. If you have not signed up yet, scroll to the top to find a special link.

The gameplay and strategy are a little bit different from the original version. Here you have between three and eight players, an All-in mode after a certain number of hands, and a choice to pick a random prize out of three allocated ones. Once you win a Spin & Go Max game, you will get the chance to pick your prize.

Three prize options will appear at the end of each tournament.

PokerStars introduced Spin and Go Flash Games as soon as Winamax introduced their Expresso Nitro spins. It is pretty simple, everything is the same as in the classic version, but you get 300 chips and the blind levels increase every minute.

Unibet has its unique version of Spin and Go games called HexaPro. The rules are the same, however, the way they charge rake, their blind levels, and the prize multipliers are a little different but that is a good thing for most of the players. Read the summary below to learn more.

PartyPoker site has classic Spin and Go games called Spins, they have various buy-ins and even million-dollar jackpots. Its first Spin and Go version was called Sit and Go Hero (SNG Hero) which hand antes and short blind levels.

Since the first version was not very successful, while upgrading their software, they introduced SNG Jackpot Spins which were a little similar but with some positive changes like a better structure and more buy-ins. The last name did not stay for very long and together with further massive software updates, PartyPoker Spins were introduced. Spins got even more buy-ins, a proper structure, and nicer graphics.

In 2020 PartyPoker released Ultra Spin Games which are the same classic spins but with smaller starting stacks and 1-minute blinds. For now, Ultra spins are up to 20$ buy-in but these should increase in the future. So if you were playing these somewhere else, consider switching since here you get a massive rakeback plus private cashback from PokCas (get in touch for more information).

GGPoker Network has also added a Spinsurance feature for more excitement. Starting stacks and blind levels depend on the multiplier so if you are a fan of fast games – you will like them. Every month we run a private 30,000$ Leaderboard for our Unibet, BetKings, CoinPoker, and WPN Network players. While our GGPoker players can request access to our exclusive rake race.

Spin and Gold is a fast-paced format that introduced both casual and professional players to challenges they have never seen before. These challenges will award you up to 63% Rakeback while you will be in a process of completing them. This process is called Gold Mining. You can select how many hours you want to mine gold and keep playing to reach your goal. This is a very nice feature since it is fun and will provide you with an extra rakeback.

GGPoker Sites have a VIP Program called Fish Buffet which is offering 15-60% Rakeback depending on how active you are. This excludes leaderboards, deposit bonuses, challenges, and other promotions which can boost your rakeback even more. Our GGPoker and Natural8 players can also receive special benefits and gifts (if you already have an account – get in touch, and we will transfer it for you).

Profitability in Spin and Go Games

Spin and Go games have plenty of recreational players and therefore are profitable. This has been proven many times with different types of data.

If you are using tracking software or if your games appear on a tracker like Sharkscope – you can see your ROI (Return of Investment percentage) without rakeback included. These are examples of what post rakeback ROI percentage was achieved by players who play very well. If you achieve at least 4% in a few thousand games – that’s very good.

Thank you for reading our guide, if you have any feedback on how we could improve it – please let us know. And if you have questions regarding online poker sites or if you are looking for a great deal and access to our private leaderboards – send us an email!

Is Spin and Go profitable in the long run?

It depends on the poker site and your skills but it is possible to make a living if you are a regular player playing these full time.

What are the other names for Spin and Go?

These are some of the most common names for Spin and Go poker: Jackpot Sit & Go, Spin & Gold, Expresso, Twister Sit & Go, and HexaPro.

Did PokerStars come up with an idea for Spin and Go games?

No, the concept was originally created by Winamax, a French Poker, and Sports Betting site in 2013.
On their platform spin and go's are called Expresso games.

What is the difference between classic and fast (flash/ultra) spins?

PokerStars introduced Spin and Go Flash Games as soon as Winamax introduced their Expresso Nitro spins. Then, later on, PartyPoker launched an Ultra version for their spin games too. Everything is the same as in the classic version, but you get 300 chips and the blind levels increase every minute.