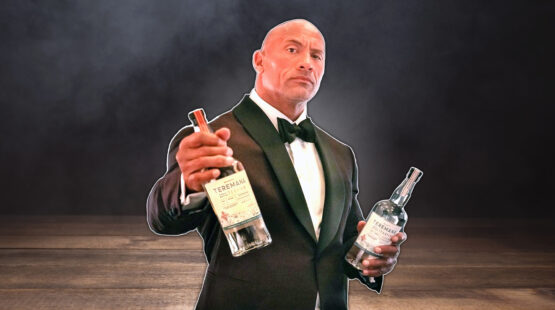 What does every successful businessman have in common? The simplest answer is recognizing opportunities and taking advantage of them. Dwayne ‘The Rock’ Johnson is the highest-paid actor on the planet right now, with a net worth of $800 million. He is also a smart businessman who knows how to multiply his money.

After proving his mettle as a professional wrestler and actor, The Rock has taken on business challenges over the last couple of years, boosting his net worth substantially. He owns an original production company, co-owns a football league, has an athletic wear collaboration, and an energy drink brand. The latest addition to his growing ventures is Teremana Tequila, the spirit brand which broke all past first-year sales records in the industry.

Produced in Destileria Teremana de Agave, Mexico, Teremana Tequila is The Rock’s newest and arguably most lucrative entrepreneurial venture yet. The spirit brand sold 600,000 crates within the first year of operations, beating George Clooney’s Casamigos Tequila. According to Johnson, Teremana had been in the works for a long time before finally launching in 2020.

“I’ve always loved tequila and wanted to create a brand that is rooted in responsible sourcing. I love that the tequila brings people together. It’s brought me close to everyone I work with and drinking tequila is such a social activity, so it’s a product I’m happy to put out into the world.” –Dwayne ‘The Rock’ Johnson 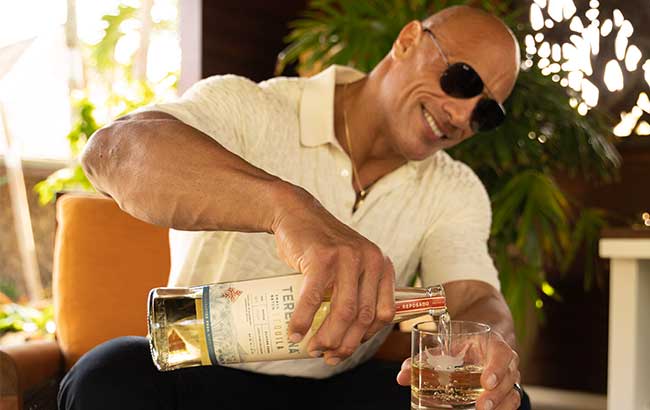 After a successful launch, Teremana Tequila has partnered with Mast-Jägermeister to expand operations outside of the US market. Teremana Tequila is set to become one of six tequila brands selling one million cases globally. Amateur valuations put the tequila brand at a whopping $3.5 Billion in 2021. Given Teremana’s rapid growth in the last two years, there is no doubt that early valuations are pretty accurate. According to Dwayne Johnson, Teremana sales are estimated to cross 800,000 cases by the end of 2022.

Looking at the fantastic success of Teremana Tequila, there is just one burning question everyone has. How did The Rock manage to create a tequila brand of unprecedented success with zero industry experience? We may have the answer.

HOLLYWOOD’S ‘MOST BANKABLE STAR’ IS AN INVESTING GENIUS

Dwayne ‘The Rock’ Johnson has a keen eye for business opportunities. Unlike these bad beat money moves, he built upon his charisma as a WWE entertainer to land his first-ever acting role in ‘Scorpion King’ in 2002. His success as an actor is why he was named ‘Highest Paid Entertainer’ in 2022 by Forbes.

The Rock realized early on that by leveraging success in one field, he would be able to enter others. Taking advantage of his public persona and personal brand, The Rock has made a flywheel of success that has served him in all his ventures, snowballing his net worth. Success as a wrestler led to a prize-winning acting career. His acting career served as a stepping stone for 7 Bucks Production, his original film and TV production company. Accumulating both wealth and popularity from his entertainment career as an actor and producer put The Rock in a desirable position for partnerships. As a result, he signed a collaboration deal with Under Armour for athletic wear. Another popular brand co-owned by The Rock is ZOA Energy. After beginning operations, ZOA Energy became the highest-selling energy drink of 2021.

If you haven’t seen a pattern yet, the success of Teremana Tequila should prove how The Rock leverages his popularity and fan following to make his investments profitable. This isn’t to say that he always knows what he is doing.

PUSHING FORWARD IN THE FACE OF ADVERSITY

The Rock’s saving grace has always been his growth mindset. It is probably the only thing that makes him push forward in times of uncertainty and disappointment. After failing in his NFL aspirations, he pursued professional wrestling, the decision which has made him a millionaire. Learning and adapting on the go helped The Rock tackle Teremana Tequila’s launch during peak Covid-19.

In 2020, The Rock was ready to introduce Teremana to the world. However, the pandemic struck and businesses everywhere shut down. For Teremana Tequila this would have meant imminent doom since the spirit brand hadn’t even made it to the shelves yet. Stuck at home, Johnson decided to introduce Teremana to the world from his kitchen. Sharing Teremana-related content with his Instagram audience proved to be a winning strategy. Fans felt authentically connected to him via his Instagram live streams and orders kept racking up. 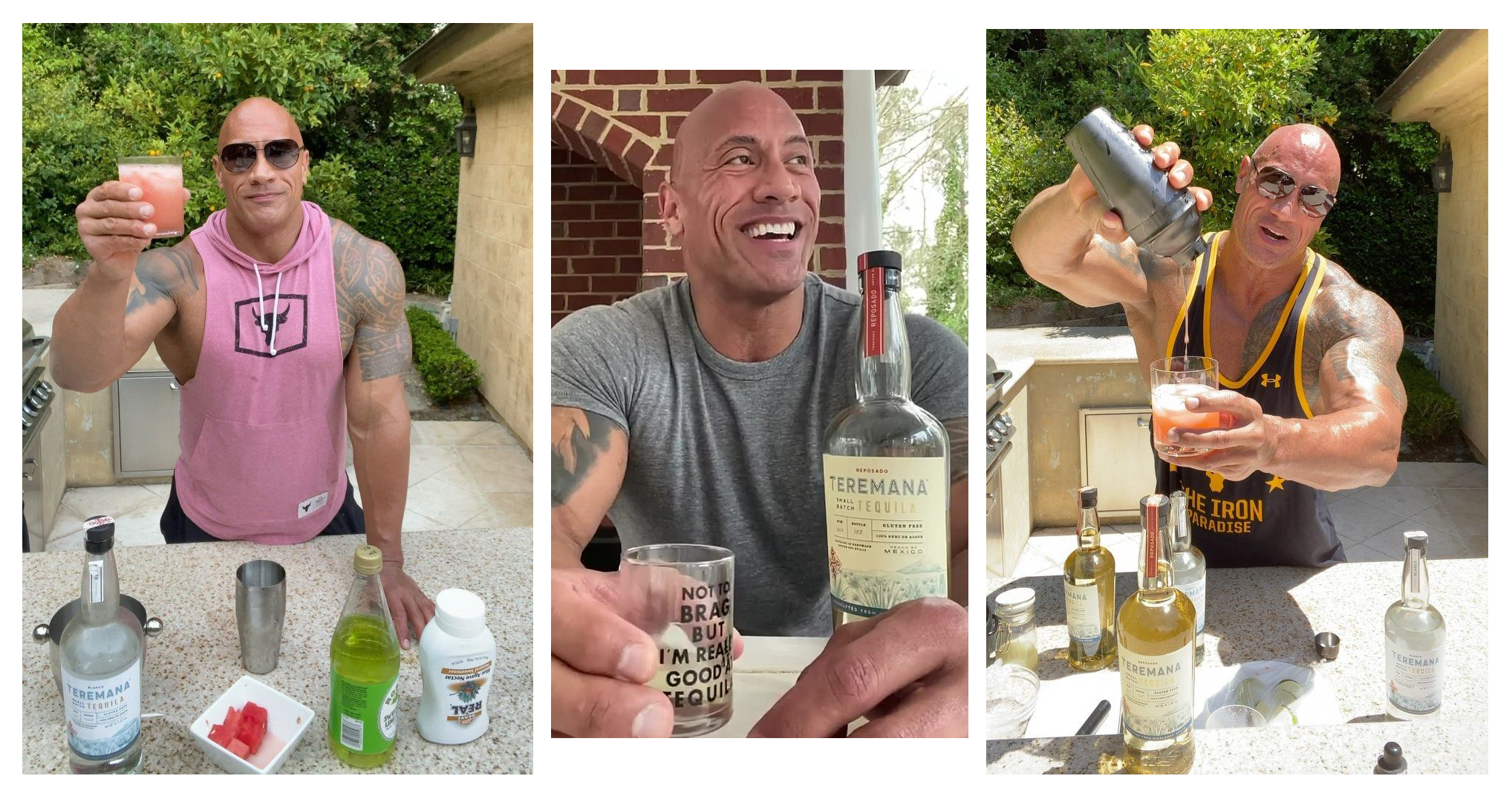 The Rock shares Teremana Tequila recipes with fans whilst self-quarantining for covid-19. Credit: The Rock on Instagram

The initial pandemic months also saw a US-wide rise in liquor sales, approximately 34.1%.  This meant that the pandemic provided a unique opportunity for Teremana to build a market share. Which it did. Add to the fact that The Rock’s tequila brand is the most affordable celebrity-endorsed liquor available, Teremana Tequila saw staggering sales in its first few hours post-launch. Johnson also leveraged the holiday season to boost liquor sales by partnering with ‘Salt and Straw’ and sent a 100-year-old fan some bottles in goodwill. All these activities helped promote market demand and sales. As a result, Teremana is now a 4 billion-dollar tequila business surpassing its competitors in the industry.

The seemingly overnight success of Teremana Tequila can be attributed to years of hard work and unwavering business-building efforts undertaken by The Rock.  When it comes to his success, there are three things that stand out the most to any observer.

1. BUILDING A STRONG BRAND AND REPUTATION

The Rock put his earliest efforts towards developing a strong personal brand. His reputation as a hardworking individual and dedicated performer helped him gain a loyal fanbase. A positive attitude toward life and his philanthropic ventures further inspired his fans. These same fans then became an unwavering force propelling all of The Rock’s ventures toward success.

The Rock made many transitions throughout his career and has worn many hats. He did not hesitate to take on new roles and challenges when his current ones stopped serving him whether it was an aspiring NFL player or a professional wrestler. Pivoting in a timely fashion allowed The Rock to take advantage of business and networking opportunities that presented themselves, and he grew his net worth in the process.

The Rock has always established meaningful connections with people within the industry and his personal life, leveraging both where needed. By working with the biggest names in entertainment, The Rock was able to further his career as an actor and producer, which in turn increased the success potential of his business ventures. To realize the Teremana dream, he took the help of his ex-wife and business genius Dany Garcia along with two liquor industry maestros Jenna Fagnan and Ken Austin. Courting long-term relationships and expanding his network have been crucial to his success.

From $7 in his pocket to $800 million to his name, The Rock’s journey has been inspirational for many.  Dwayne Johson has made his mark in the entertainment industry, the tequila business and the athletic wear market. While Teremana Tequila may be the venture that eventually makes him a billionaire, he isn’t settling any time soon. Staying true to his entrepreneurial spirit, we are excited to see what the People’s Champ comes up with next.