Why The Richest Man in the World, Elon Musk, Must Borrow Money To Buy Twitter 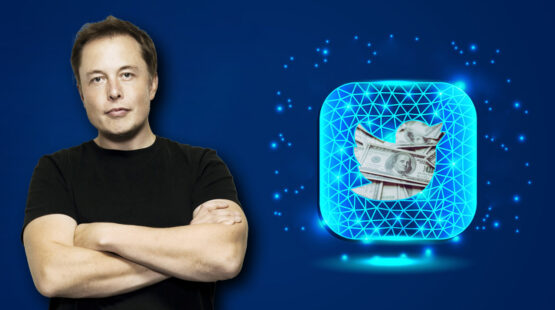 One of the most trending headlines in news circles today involves Elon Musk’s attempt at a hostile takeover of the social media platform, Twitter. The richest man in the world is a fan of the platform and uses his Elon Musk Twitter account more frequently than many of his business rivals do theirs.

But the billion-dollar man has seen the chinks in the chain of the network and has opted to fix them by attempting to buy the company outright. In his mind, there is far more potential for Twitter than what it is leveraging right now. As such, he’s borrowing billions of dollars to try and affect change in a hurry.

Elon Musk’s interest in Twitter has certainly been a growing one. He has been secretly buying shares in the social media company over the past few months, amassing a whopping 9.2% stake in the organisation. That makes him the company’s single largest shareholder right now.

The announcement of his shareholdings immediately spiked the price in the value of the company. However, Elon is not content with a bite-size chunk of the ‘pie’, he wants it all. In fact, so badly that he has placed a bid of $54.20 per share to purchase it all, valuing the company at around $43 billion. Musk said:

His message was concluded with a statement that if he could not make a deal happen, he would reconsider his current investment in the company. Now, we all know Musk’s ability to influence markets. What he did to the value of cryptocurrencies like Bitcoin and Dogecoin in the past was unprecedented, and his announcement to de-invest in Twitter may be a veiled threat to shareholders that by him pulling out the company’s value would drop.

Elon Musk has been clear that he is less worried about money than he is about changing the world. Both Tesla and SpaceX were started with a view of shaping the future of humanity for the better. His desired acquisition of the social media company seems to align with that same premise.

It is apparent that the multi-billionaire wants to privatise Twitter so that he can unlock its true potential as a platform that truly supports freedom of speech. The successful tech genius seems dissatisfied with the banning mentality and censorship that so frequently occurs on the platform. He seems to believe that people’s opinions should be heard. He stated in a filing with the Securities and Exchange Commission:

“I invested in Twitter as I believe in its potential to be the platform for free speech around the globe, and I believe free speech is a societal imperative for a functioning democracy.”

He went on to say in an interview (after being asked why he wanted Twitter), “It’s really important that people have both the reality and the perception that they’re able to speak freely within the bounds of the law.”

Power to the People

The freedom of humanity is something that Elon must most certainly hold dear, as he has been an avid supporter of cryptocurrency in the past. It’s well known that this sort of virtual currency is unregulated by nature and puts the power squarely in the hands of its users.

There seems to be a range of changes the Elon Musk Twitter takeover may involve, one simple example would be the implementation of a post “edit” button. Once again, a tool that will help people regulate their own posts. Elon even took to Twitter with a clever pole to prove his point about the need for one. 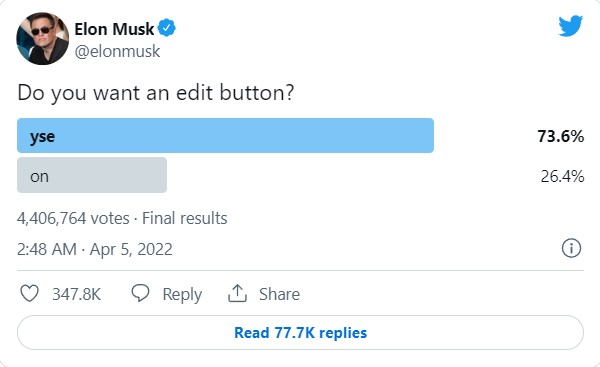 In the post above, an edit button would really come in useful when trying to correct the spelling of ‘yse’ (yes) and ‘on’ (no). The 73.6% of votes in favour of the tool seem to agree with his thoughts. He also aims to make Twitter’s algorithm open-source, eliminate scam bots, and make the verification process far simpler for users.

Why Elon Musk Cannot Buy Twitter Outright on His Own?

A point that may baffle many mainstream readers is that the math does not seem to line up with what we have been told about Elon Musk’s net worth. The Elon Musk Twitter offer was made without secure finance in place. The latest reports are that Musk is planning to use debt as his primary way of financing the purchase.

In his Security and Exchange Commission filing, Elon listed several sources for the offer. He had secured $13 billion from Morgan Stanley Investment Bank and another $12.5 billion from various other financial companies. The final source of revenue was sighted as an equity commitment of $21 billion from Musk himself. This final source certainly carried an implication that some of Musk’s equity in Tesla (of which he owns $200 billion) would be put on the line in the deal.

But hold on you say, isn’t the mogul worth over $250 billion? Why can’t he fit the bill himself? The problem is that net worth is not worked out on the amount of cash you have in the bank. It’s based on your total asset yield. Most of Musk’s wealth is tied up in Tesla, SpaceX, and the Boring Company. If he had to put up all the equity from either one of these companies, their share prices could plummet because of the potential risk involved. Already, Tesla’s value dropped by 3.7% upon Musk’s announcement to pursue Twitter. 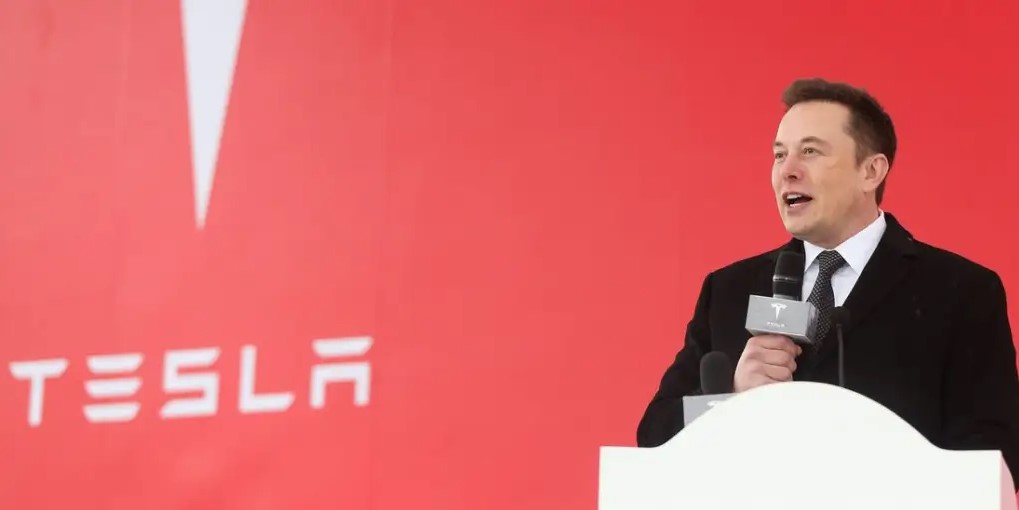 By opting to take loans to purchase the company, he takes most of the risk-off his existing business’ investors and places it squarely on his own shoulders. That way, his other companies can continue to progress unhindered by the deal. It does, however, leave space for other equitable investors to climb on board, but Musk could pick and choose them.

While the board of directors has not rejected the offer on the table, Elon Musk’s Twitter plan had a second tactic in place. If the board would not accept the deal, he was determined to privately approach shareholders and buy up shares until he had a controlling interest in the company. This hostile takeover would give him the necessary clout to privatise the business and leave in place investors who wished to go along with his directives. A privatised company could then remain unregulated by the FCC and the owner would have a fair share of autonomy over its business dealings.

However, the Twitter board has moved quickly to install a “poison pill” in the workings to thwart a forced takeover should Musk overplay his hand. It would make buying the bulk of the shares far more difficult. The plot is to flood the market with new shares the moment any single holder managed to own a 15% or more stake in the company. This would make acquiring the bulk of the company an extremely difficult and expensive process. However, it should only be played as a last resort, as the ramifications on the share price could affect its investors.

ALL HOPE IS NOT LOST

Twitter is yet to respond to the official Elon Musk Twitter bid and could even accept the acquisition proposal should they feel that it is within the best interests of their investors. But Elon has publicly questioned why the Twitter directors own measly shares in the company. He brought into question how their interests could possibly align with the best interests of the rest of the investors. He posted the following tweet in response to a Twitter post by Chris Bakke that displays the board’s measly holdings: 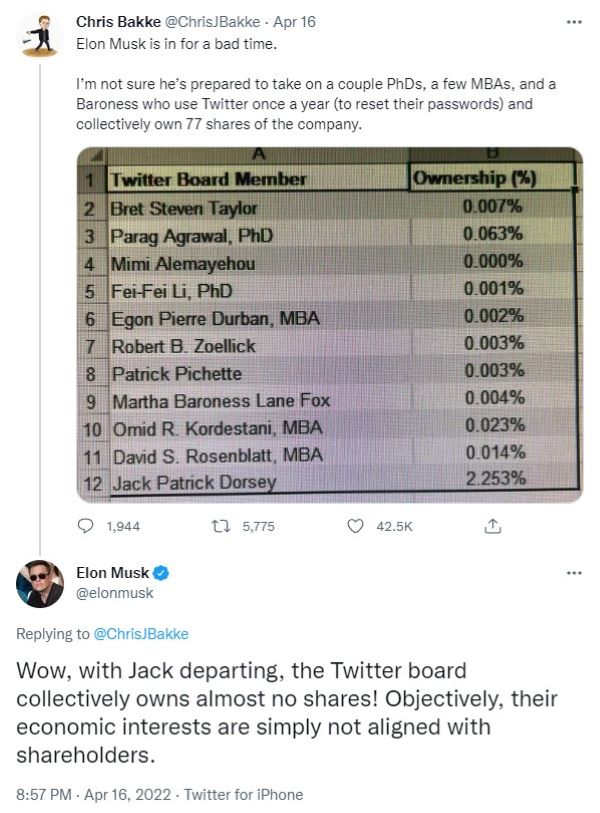 One thing we can tell you though… If he is successful in his bid, he will hold the tech universe in his hands. Not only will he hold the key to space travel (SpaceX) and future of automobile travel (Tesla), but also the keys to the vehicle of universal conversation and expression.