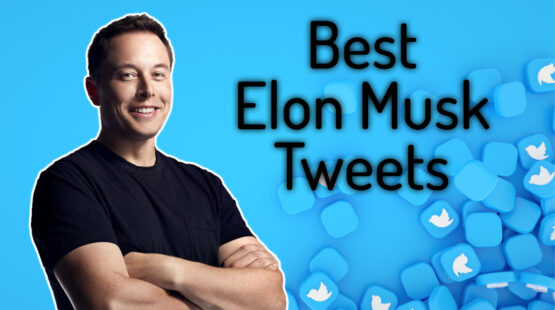 What happens when super-intelligent people become bored with life and simply want to have a go at the state of humanity? Well, in Elon Musk’s situation, it seems like they turn to Twitter! If you’re wondering why we say this, then you surely haven’t followed the Elon Musk Twitter feed in the past few years, have you?

Elon Musk Twitter posts are often outlandish and bold. In fact, so much so that he’s even been questioned by various news houses on the merit of some of his posts. Elon Musk’s IQ has been touted in the region of genius level, so while many of the tweets might seem silly, he is just having a good old go at people’s perceptions and behavior. You just need to read between the lines.

Mr. Musk has made claims about his @elonmusk Twitter feed, stating that people really shouldn’t take him too seriously on the platform. He tweeted: “I was always crazy on Twitter fyi” (15 April 2019). Elon has told interviewers in the past that he uses Twitter to express himself and to be who he wants to be. He makes some of his posts just for kicks. Unfortunately, though, many of his tweets have cost investors a fortune, so it’s difficult to take them all with a pinch of salt.

While some of Elon Musk Twitter posts make poignant points and herald news about business decisions and other serious matters, many of his posts are random memes and jokes. Then, every so often, there are other tweets that leave the public scratching their heads in confusion and even disbelief. Join us as we explore, what are in our opinion, some of his best Elon Musk Twitter posts. Why do people hate Elon Musk? Just carry on reading to find out. However, you might surprise yourself and fall in love with him along the way instead, so beware! 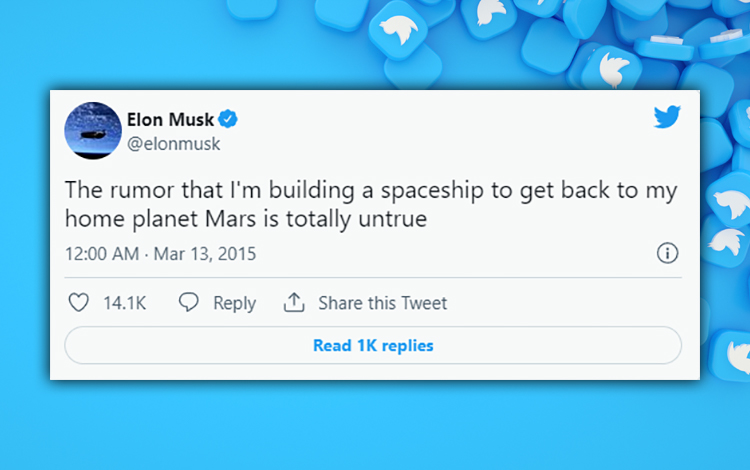 When a man who talks and thinks differently suddenly decides he wants to be the first person to provide commercial space flight to Mars via his company, SpaceX, you can’t blame some people for thinking he has some sort of extra-terrestrial tie. But Musk added to these conspiracies by declaring (jokingly) that he is not building a spaceship so that he can return to his home planet. However, he never refuted the fact that he could be an ET. Of course, he knew this would stir up the conspiracies even more, but we believe that he enjoys messing with people’s minds in this way.

Elon Musk was asked by a Twitter follower in April 2021 if he was in fact an alien, to which he replied: “Obv” (obviously). Let’s not forget, though, that it was Elon, himself, who started the whole Alien debacle anyway. He once replied to a Twitter user who asked him how he managed to disrupt multiple industries at the same time, by saying – “I’m an Alien.” Well, to tell you the truth, it would answer a lot about the man’s enigmatic personality.

2.   Musk Admits to Being Weird 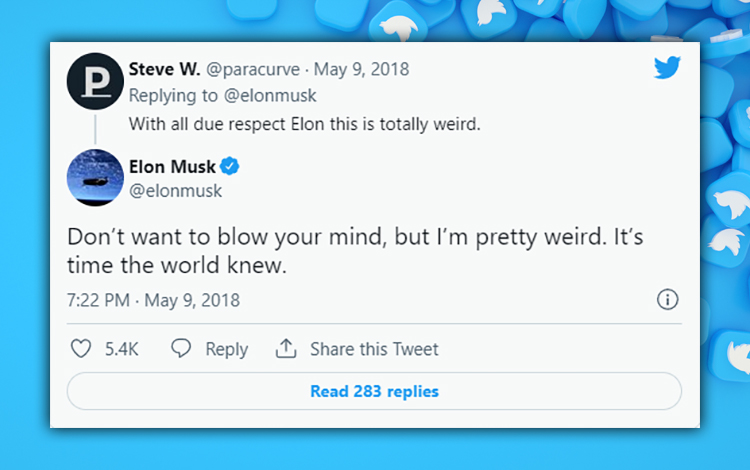 Just in case you wondered if Elon knows he is a little different, he openly admitted it to his growing Elon Musk Twitter following. In May 2018, a Twitter user remarked that one of his ideas was “totally weird”. His reply was quite candid: “Don’t want to blow your mind, but I’m pretty weird. It’s time the world knew.”

Mr. Musk has never denied being different. It’s part of what makes him special. Heck, we can’t fault it either. After all, he is the wealthiest man in the world, so he must be doing something right. 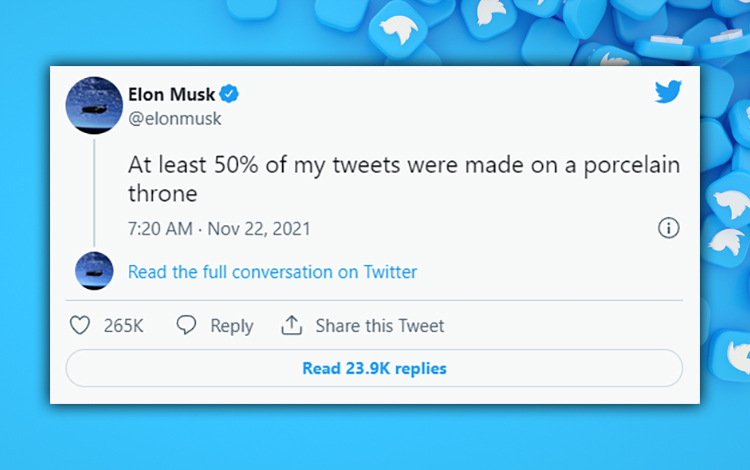 In November 2021, the wealthy billionaire randomly posted on his @elonmusk Twitter feed that he posts 50% of his tweets from a porcelain throne. This implies, of course, that much of the content he tweets is conjured while using the restroom. Once again Mr. Musk is alluding to the fact that he realizes that half his posts are absolutely random and contain senseless cr*p.

Of course, renowned astrophysicist, Neil deGrasse Tyson, could not resist getting in on the dig. He answered, “That comes to more than 8,000 tweets over 12.5 years. If you do the math, it means you poop twice a day. Did you really want to tell people that?”

While it’s shocking that one of the world’s most influential men would stoop to potty humor, it goes to show how different he is from his peers.  If you were wondering before, “why do people hate Elon Musk?” – perhaps now you are getting the picture. He really doesn’t fit the mold people are expecting. But he seems to be okay with that. 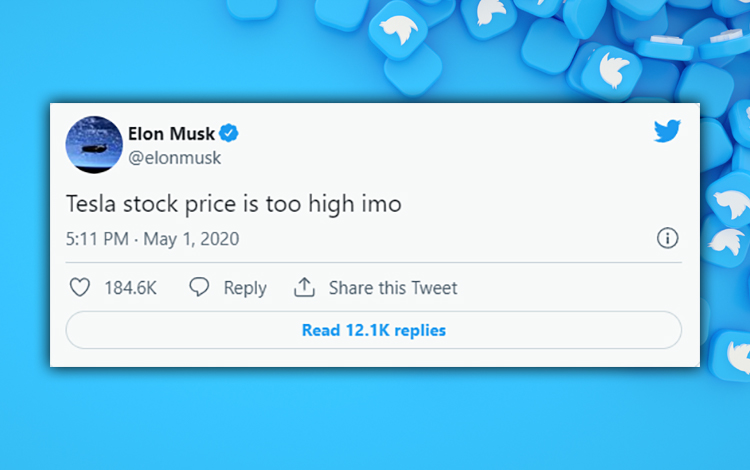 Why do people hate Elon Musk? Well, this single tweet turned many of his investors against him overnight. It’s just one of those Elon Musk Twitter posts that we just cannot understand. It makes no logical sense why his comments were ever released onto social media. It cost him and his investors greatly.

In 2020, Elon Musk remarked on Twitter that he believed that the stock price of Tesla was too high in his opinion. That careless remark cost the electric car company $14 billion as investors began to dump their assets in response to his claims. The statement cost Elon $3 billion from his own personal wealth too, but many investors lost big money as a result.

Do you think he learned his lesson, or do you think he tweeted the comment as some elaborate experiment to test just how much influence he had over the markets? Of course, the company is far from bankruptcy and the eccentric entrepreneur is still the richest man in world history. Perhaps the loss was a small price to pay for the knowledge and power he gained in that one move – who knows how this unique millionaire mindset thinks. 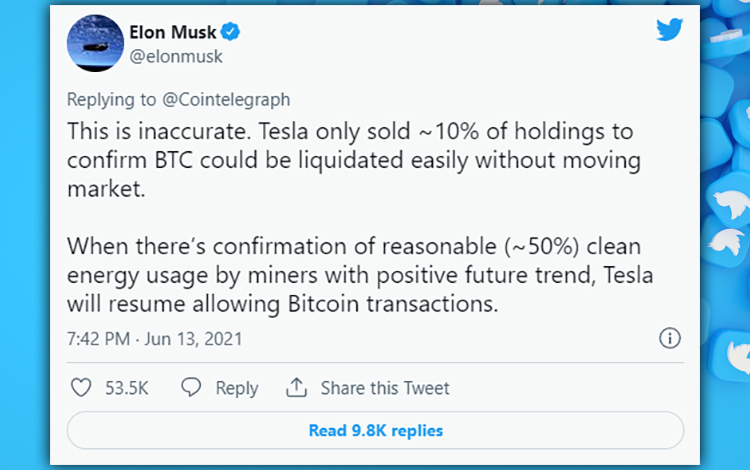 One of Elon Musk’s Twitter feeds had the crypto world in an uproar in mid-2021 after the multi-billionaire businessman announced that Bitcoin would no longer be accepted by Tesla until it could prove that it was more energy efficient. This was only weeks after the car company invested $1.5 billion in BTC and told the market they would accept the currency. That one tweet shed $365.8 billion in value over the entire crypto market, as holders offloaded their stakes en mass.

It cannot be fathomed why an investor would release such news into the public space knowing that he is one of the most influential people on the planet. It’s akin to self-harm, as once again, Tesla lost millions in value because of the tweet. It’s seemingly careless moves like these that begin to answer the question of why do people hate Elon Musk. Well, some people at least. 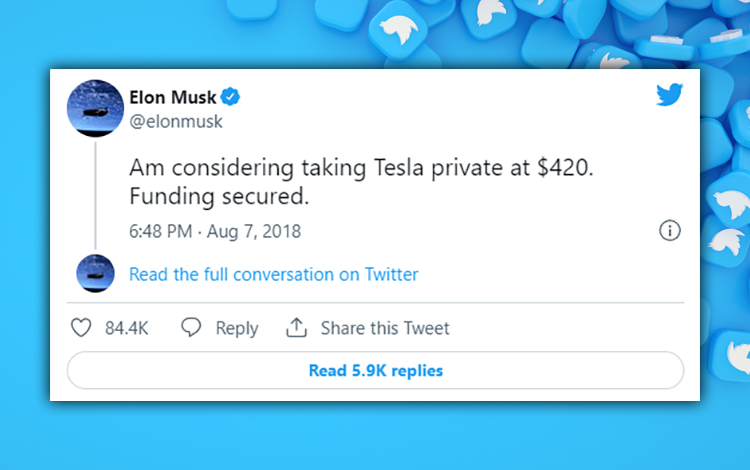 This next Elon Musk Twitter posting was done light-heartedly, however, it was taken up the wrong way by the authorities. Musk tweeted, “Am considering taking Tesla private at $420. Funding secured.” The $420 mention was a tip of the hat to the date (420 or 4/20 or April 20th) which is widely known as a holiday for celebrating cannabis culture.

We’re not sure, but we believe that Elon was showing solidarity for the use of cannabis. Unfortunately, the Securities and Exchange Commission (SEC) did not take kindly to his post and sued him for fraud. They regarded his comments as fact and would not accept that he was joking around. Musk was forced to pay a $20 million settlement fine and was made to step down as the chairman of Tesla for three years.

His punishment just soured him more, sparking a post in which he referred to the SEC as the ‘Short Seller Enrichment Commission’. He wrote, “Just want to say that the Short Seller Enrichment Commission is doing incredible work. And the name change is so on point!” When questioned on Twitter about how he felt about the post that cost him $20 million, Elon simply replied “Worth It.” 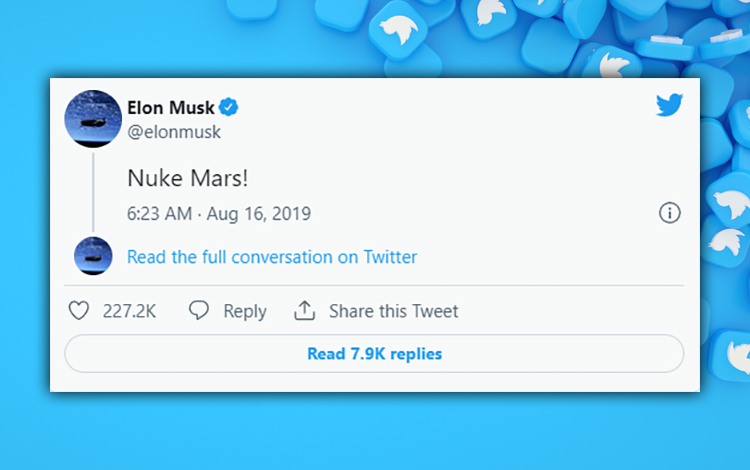 “Nuke Mars!” was a two-worded Elon Musk Twitter tweet in 2019 that mustered 227.2K reactions and 27.3K retweets. But what on earth was he on about? Is he really on a warpath with the planet or is there another meaning behind his post? We believe it’s the latter.

This is the man who dedicated his career to making space travel possible. His idea to Nuke Mars was certainly not so that he could destroy it but rather so that we could embrace it as a possible new home for mankind. Elon holds to a theory that if we were to detonate thermonuclear weapons on the poles of Mars, we could potentially turn the red planet into an earth-like orb in a few decades. It is thought the radiation heat from the blasts would be enough to warm up the planet’s atmosphere.

It sounds like a plot from a science-fiction movie, but Mr Musk seems quite serious about the idea. Who are we to question a notable genius? It seems that the term ‘Martian’ may be a synonymous term with ‘human’ in the future. 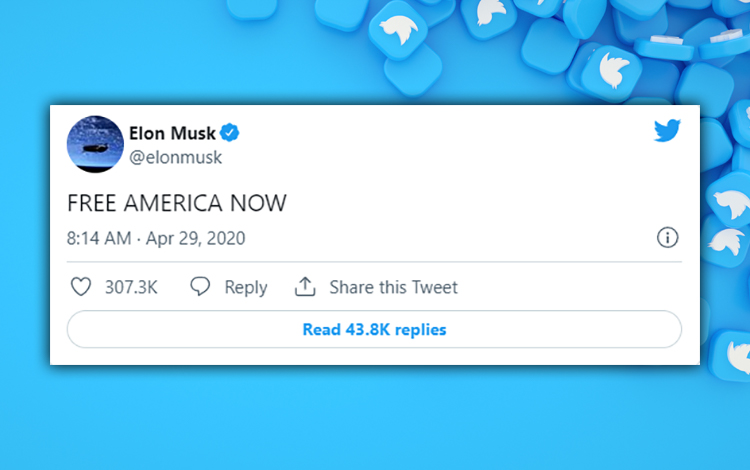 While the upper echelons of secular society generally try to steer clear of trouble with the government, Elon Musk doesn’t seem too perturbed about going against the grain with the powers that be. An April 2020 post saw him slam the Covid-19 lockdown efforts by US authorities by tweeting, “FREE AMERICA NOW!”. His stance on human rights may have been a little too premature though. He went on to inaccurately predict that there would probably be zero new infections by the end of April that year. Unfortunately, the virus ravaged the country brutally, instead.

We again see traits that set this man apart from the rest of his peers. He simply is not scared to stand up for his convictions. However, he may have to think about regulating his posts a little more in the future, especially when they have to do with a serious humanitarian crisis. 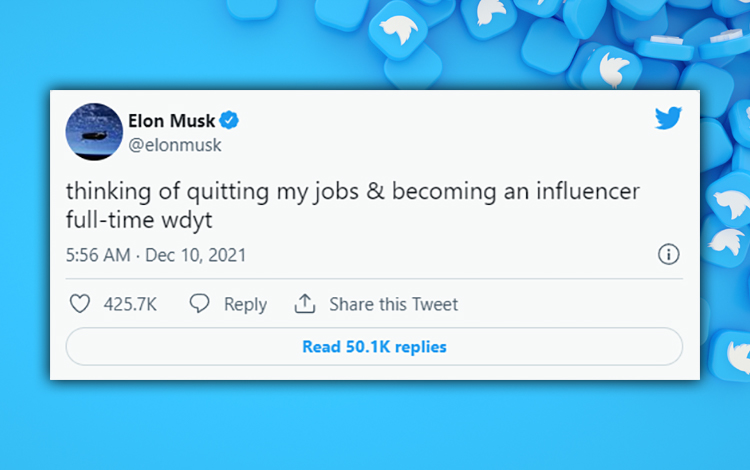 A recent post on Twitter by Elon Musk attracted over 425K likes from his followers. His post read: “Thinking of quitting my jobs & becoming an influencer full-time wdyt.”

I think Elon is finally starting to realize just how much clout he has in the world. We believe he is alluding to the irony that it was never his intention to influence people, yet has managed to do so anyway. However, after the events of 2020 and 2021 (depicted in the article above) who would blame him for thinking he could make a mint by doing so. Famous YouTuber, Mr Beast, even joined in on the quip with his offer for help. He responded, “I’ll coach u on how to get YouTube views.”

Such is Elon’s apparent power to influence, he has inspired us to change the format of our article. You’re probably wondering why we have opted to end this article with a top 9 list of tweets rather than a top 10 list. It’s not like there is a shortage of Elon Musk Twitter content out there. Simply put, we’ve decided to follow the example of the world’s wealthiest man and be different.

Do people really hate Elon Musk, or is he one of those guys that you have both a love and hate relationship with? You must admit, he is rather comical at times. Also, most of what he does is for the greater good of mankind. Yes, he isn’t bothered with the status quo but is that a bad thing? Does the world not need new thinkers to advance beyond its current situation? We’ll leave you to answer those questions while we stay tuned to the Elon Musk Twitter feed for entertainment purposes.